We feed birds, intentionally, and sometimes unintentionally.  I notice now that most of the regular visitors, the chickadees, the Goldfinches, the scrub jays and others are now bringing their young to the feeder.  Chairman notices too. He wants to make a kill but he's just too old and slow now.  Still he looks longingly.

The face of sullen patience 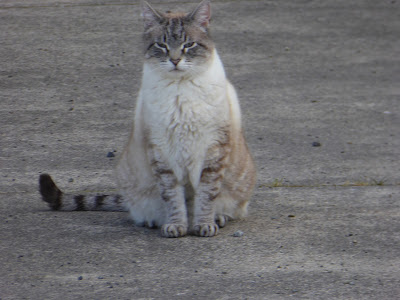 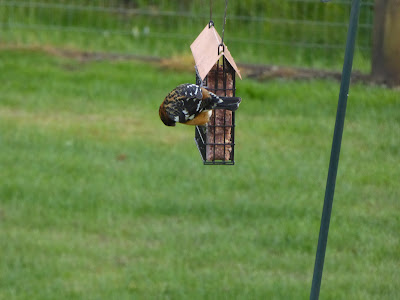 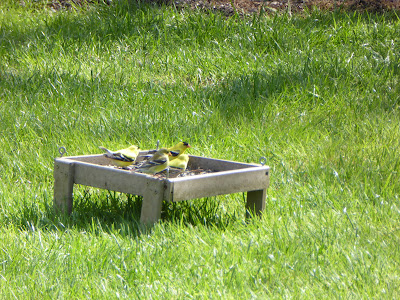 The scub jay chick hammering away at a sunflower seed.  Seems like more energy expended than gained. 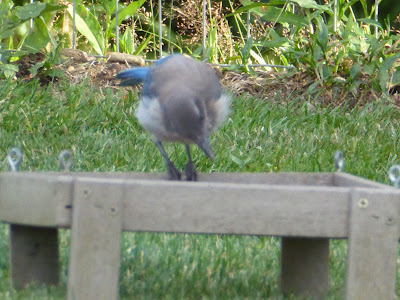 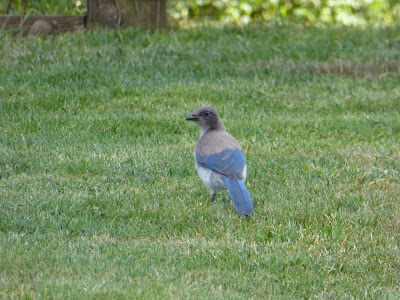 The berries are on now.  We pick a bowl of each of blue berries and raspberries most nights then have them after dinner or with breakfast in the morning.  I have noticed robins raiding the blue berries recently.  This evening a robin brought her chick along to see how it is done.  She feasted but the chick didn't seem to get it.  I'm sure they will be back for another lesson. 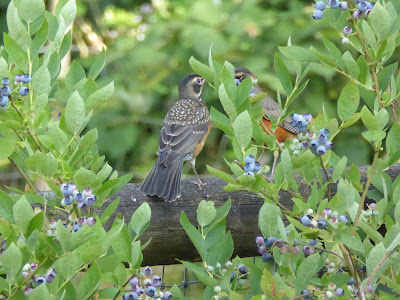 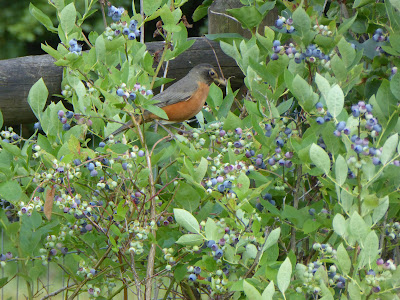 Caught in the act 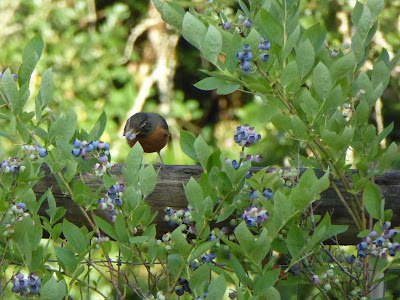 The three bucks are in the pasture most mornings, they seem to prefer the raspberries and fresh shoots of almost everything.  They especially like my neighbors garden, he finally broke down and built a deer proof fence. 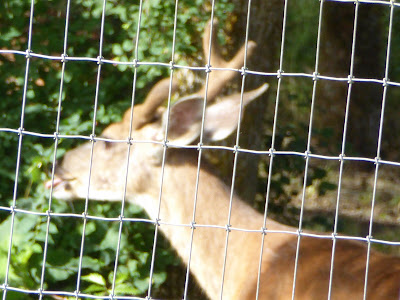 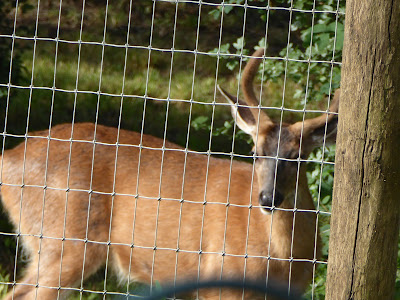 We went for a ride out on south bank road this morning.  It was the perfect day for a ride, broken clouds, a bit cool in the morning but warm by noon. 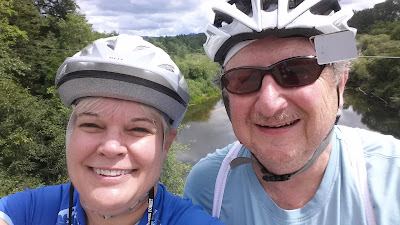 The Cedarville volunteers have a sense of humor.  This is the USS Cedarville, launched but waiting for the tide to come in.  That's 'Station 2' in the background. 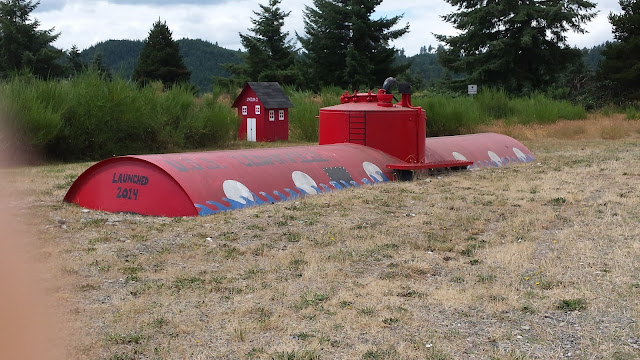 It is that time of year also 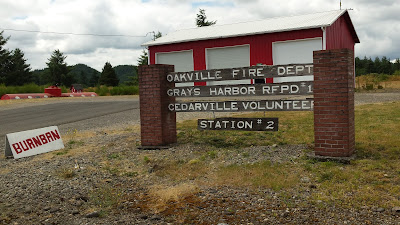 Posted by Paul Johnson at 8:31 PM No comments:

quick post here.  The big chick was 4 weeks and 2 days old on the 4th of July when (s)he flew from the nest box, never to return.  (S)he's now a full time resident of the flight cage, the adults still feed her, but not much, she feeds from the seed cups regularly and we have started making Parakeet Salad to help boost growth.  Parakeet Salad you say? Simple recipe really; small dice three parakeets, add two cups of  ....hey just kidding.  More on Parakeet Salad down the road.

Anyway, what I am getting at is that the little chick is still in the nest box.  We've opened the door to the nest box so that if/when he wants he can just step out on a perch I put there for him.  As it happens this makes it super easy for the adults, mom, dad, and even Uncle Oliver to feed him.  He hangs out there and the adults come to the perch and feed him.  This may be in the process of backfiring, perhaps he'll never see the need to fly so long as the adults keep feeding him.

It is a good thing actually, I have been weighing him since the big chick flew, to see if he has been maintaining or gaining weight.  He actually lost weight recently, went from 37 grams on the 6th, down to 35 grams yesterday.  He's getting bigger now, was 36 grams tonight, I think the Parakeet Salad is helping.

Anyway here are your chick pics for today:

At The Weigh In 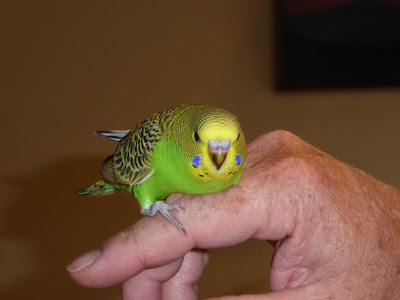 doesn't feel very hefty to me 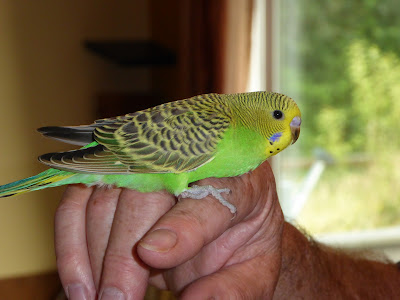 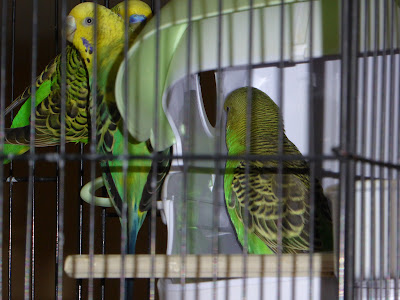 These may be the last pics of him being held, once they fly they don't just automatically sit on your finger. We have heard him in the nest box fanning his little wings practicing up for the real thing.  Perhaps he'll be perched out in the flight cage tomorrow afternoon.

Little chick will be 4 weeks and 2 days old tomorrow.

Posted by Paul Johnson at 10:36 PM No comments:

A beautiful Day in the Neighborhood

As Mr. Rogers would say.  But it was Friday and I was stuck in my gray walled cubical staring at the dope scope, fact checking an environmental report on a waste water treatment plant.  Oy.

I got an email message from Brian who has moved to Astoria.  He said he was coming to town and wanted to stop by on Saturday to pick up some tools I had borrowed years ago and would I be home, and also, how about a ride (Brian never travels without a bike, even when he's driving).

Talk about a mood swing!  The thought of a sunny day social pace ride out the Southbank road with an old friend really lifted my spirits.  So heck yeah bring it on, and about what time will you be showing up?

That evening as I was doing a tune up ride I thought of the many miles, events, brevets etc. we had ridden together.  It occuried to me that friend John who lives just a coulpe miles away might be interested in joining us. I emailed him when I got home and he said he'd be there, '9ish' was the agreed start time.

Saturday dawned, one of those days that makes any place seem like the nicest place in the world to go for a little bike ride.  70 degrees, sunny, and no wind, that's hard to beat.  I am not saying our neighborhood is better than your neighborhood, but when it is like this, the homer in me thinks there is no better place be.

We rolled out and in less than 5 minutes were tooling along on a country road, bright sunshine broken by deep shadows cast by maples and firs, the occasional car or farm truck rolling by,  These folks always give us a wide berth and usually a wave.  Southbank road is farm country 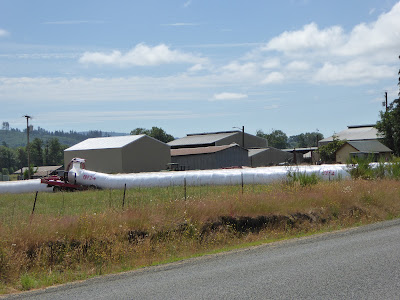 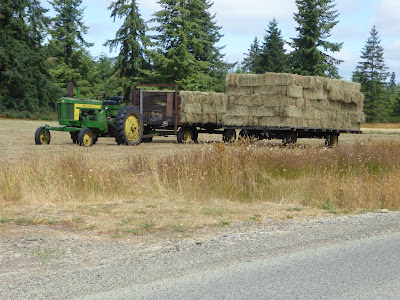 and is used almost exclusively used by locals, folks who are not in a rush to get 'somewhere'.  They're not put off by those pesky bicycle people.  I like that about this place.

An almost idyllic ride but there is always something wrong with everything.  In this case it was the road surface. 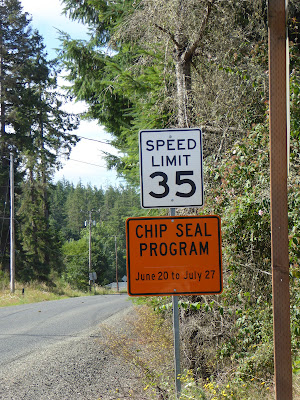 I don't mind keeping my speed below 35 mph, but fresh chip seal is no one's friend. but even that wasn't too bad.  The chip seal was a couple weeks old, so it has been swept of the really loose stuff, and has not suffered that searing heat which brings gooey wet tar to the surface to stick to your tires and bike frame.  As someone said, it could be worse:  it could be 1:00 am and we could be riding in a cold rain and it could be 25K to go to the next control. 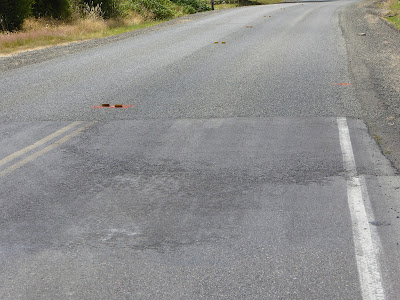 Or there were segments where the road crew didn't bother to put down new chip seal all the way across the shoulder. 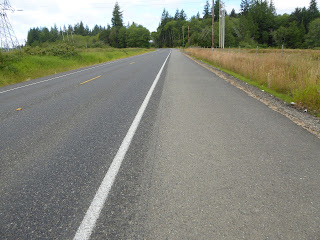 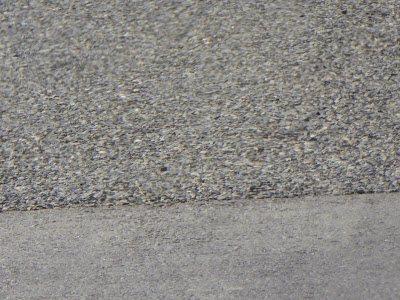 This road can devil you however, thanks to a weather phenomenon known as the Chehalis wind Gap

Winds coming in off the Pacific (onshore flow in weatherman speak) meet no resistance where the Chehalis river dumps into the ocean (Aberdeen and Hoquiam) and so we can get monster blowers on days when most everyone else is experiencing light breezes. The weather Gods smiled on is this day, there was no perceptible head wind on the way out however we all noticed a 2 or 3 mph speed increase on the return leg, we were getting a slight push home.

At Elma we took the obligatory C-store break and had snacks and cold drinks. And then headed back toward Oakville. 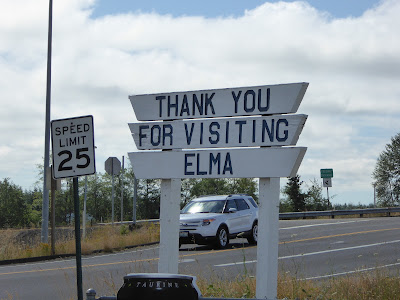 There is a nice Osprey nest close to the Chehalis river bridge if you are interested in seeing one of these majestic birds. 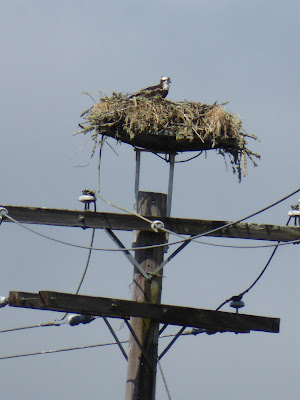 Fishing must be good on the Chehalis. there are two more of these nests (active) within 3 miles of my house.  And I once lost one of my Koi to an Osprey, really, I saw it happen.

The rest of the ride was uneventful and soon enough we were back at Rocky Acres where Mrs. Dr C had a nice spread of cheddar and crackers,  an array of drinks and raspberries fresh from the garden with short cake and whipped cream.

So no ride stats, not stories of epic suffering, just a mellow ride report - imeasurably better than being cloistered in the office cube.

Thanks Brian and John for the fellowship.
Posted by Paul Johnson at 1:04 PM No comments: 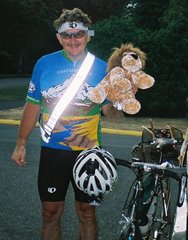 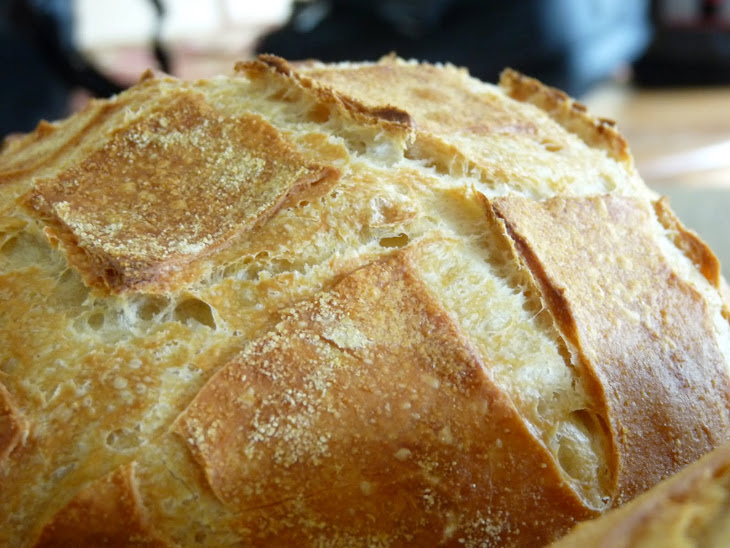